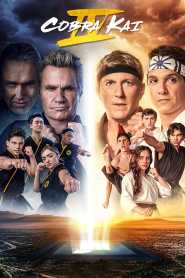 Faced with a common enemy, Daniel and Johnny decide to start working together while Kreese looks to the past for a new ally of his own.